Here at Save Ibiza we not only want you to enjoy an authentic experience on the island at an affordable price, we want to share with you the hidden gems that take you off the beaten path and allow you to see sights that are often ignored or hidden to so many.

One such area is known as Es Broll de Buscastell, just 5km out of San Antonio, it is an area of stunning beauty that will make you feel like you are a million miles away from the hustle and bustle of town. This gem consists of a 4.5km long valley which follows the path of a stream that flows from the mountain and feeds into a well known as Es Broll (Ibicenco for “spurt” or “stream”). This well is the largest aquifer on the island and the humid environment it creates makes it a perfect fertile location to plant crops. The walls of the valley are lined with cultivated terraces planted at different levels which are watered through an irrigation system put in place during Arabic times. 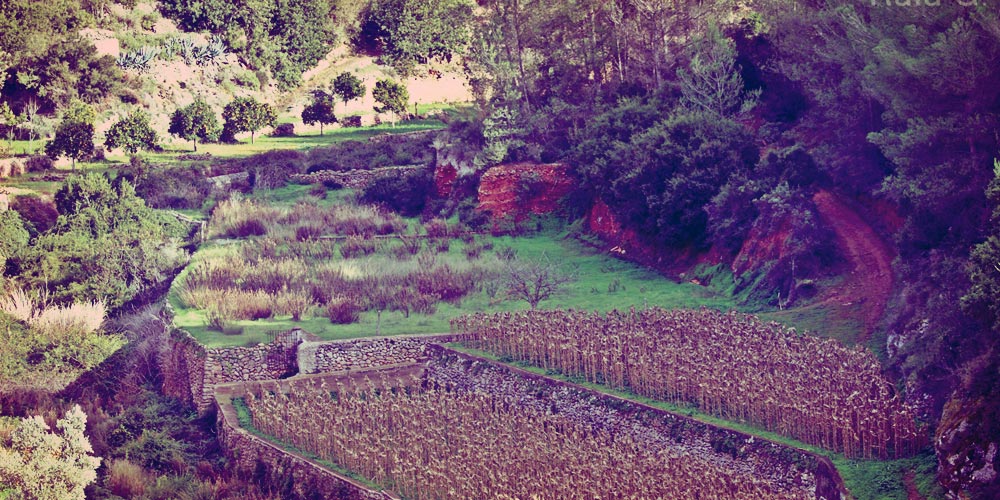 These are made up of an ingenious network of water mills, tunnels and shelves which function just as well today as they did when they were built and distribute water effortlessly to the surrounding fields. The effect is a lush green, almost jungle-like, flora set against the red soil backdrop. It is extremely rare to find a stream with running water on the island but this small haven defies all odds. During rainy seasons the water overflows creating small waterfalls and cascades that run through the valley and over walls of ancient stone to create some incredibly pretty scenery.  It is mainly dry in the summer seasons however, with only a few puddles to hint at the water system, however the tropical greenness still remains where most other areas of the island are dry and brittle.

The best way to get there? Pack a picnic and drive or walk along the road from Santa Ines to San Mateo. Once you spot a sign for “Es Broll” take a little trek into the countryside following the path through peaceful rural houses and orchards listening out for the sound of running water. When you arrive at the point where the road veers off away from the valley, descend the stone steps and follow the ramp down into the thick of the foliage. The best time of year for a visit is around springtime, when the sun glistens on the water from the spring showers like silver.

Real Ibiza - March 10, 2021 0
In shocking news this week Sant Josep council issued a statement to “qualify” the Municipality's Hunters Association for the management and control of feral cats. Naturally many animal...

Real Ibiza - April 21, 2017 0
Sometimes modern life can be a drag. If smart phones, social media and killer robots are getting you down then we know no better...