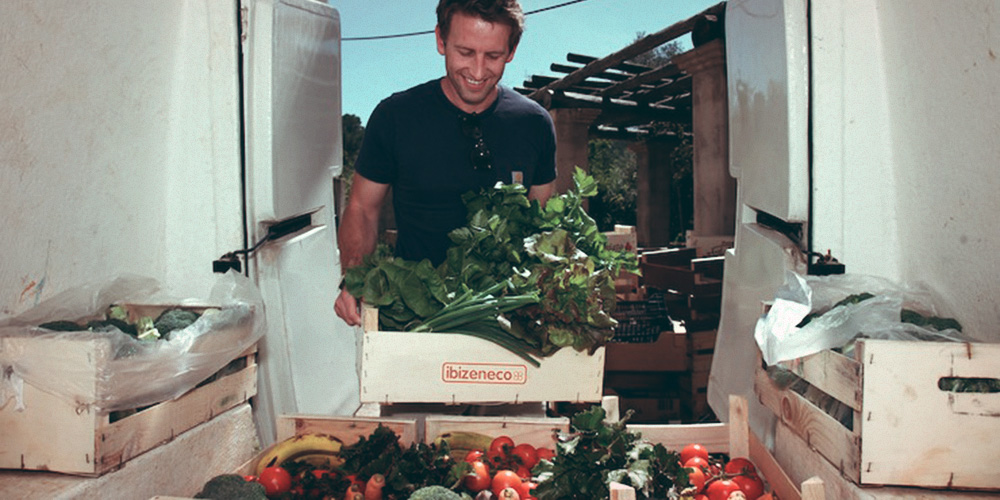 Ibizeneco is an organic produce sale and delivery service, they source their produce from local farmers and deliver directly to your doorstep. Ticking boxes in healthy eating, sustainable farming and supporting local businesses we felt it pertinent to learn a little more about Ibizeneco and introduce then to our readership, we sat down with Ben and put our questions to him.

Who is IbiZenEco and how did you arrive in Ibiza?
IbiZenEco is myself, Ben, and my Argentinian partner Fernando. Fernando joined me at IbiZenEco when my previous partner, Tsuri, returned home to his farm in Israel. IbiZenEco’s ethos and promise is to provide locally grown, seasonal, freshly picked organic goodness, with 100% love. In every way possible we support our local farmers and producers and focus on sourcing Ibiza grown/made organic produce.

Back in 2011 my wife and I were both working as Personal Trainers and hiking guides on health and wellness retreats in Southern Spain and looking for a new challenge. After a brief stay with my parents, who live in Denia on the mainland, we packed up our little Renault Clio and took the ferry to Ibiza. We had no jobs to go to and didn’t even have anywhere to stay that night let alone somewhere to live, but we did have belief and a sense of adventure and have been here ever since!

What motivated you to start IbiZenEco?
Having worked in marketing for Riverford Organic Vegetables in the UK for many years  and being an integral part of the team growing it from a small organic farm to the UK’s largest and most successful vegbox scheme, I had a deep-set passion for the promotion of organic food, especially fresh fruit and veggies. Near enough immediately on arrival to Ibiza I heard of a very new organic vegbox scheme just started by two guys, Tsuri & Doron. I contacted them to see if I could volunteer my time and knowledge and ended up taking over the business in 2013.

Why should people eat organic?
In study after study, research from independent organisations consistently shows organic food is higher in nutrients than traditional foods. Research shows that organic produce is higher in Vitamin C, antioxidants, and the minerals Calcium, Iron, Chromium, and Magnesium.

They’re supportive of growing children’s brains and bodies. Children’s growing brains and bodies are far more susceptible to toxins than adults. Choosing organic helps feed their bodies without the exposure to pesticides and genetically-modified organisms, both of which have a relatively short history of use (and therefore safety).

They’re free of neurotoxins – toxins that are damaging to brain and nerve cells. A commonly-used class of pesticides called organophosphates was originally developed as a toxic nerve agent during World War I. When there was no longer a need for them in warfare, industry adapted them to kill pests on foods. Many pesticides are still considered neurotoxins.

Organic food is earth-supportive (when big business keeps their hands out of it). Organic food production has been around for thousands of years and is the sustainable choice for the future. Compare that to modern agricultural practices that are destructive of the environment through widespread use of herbicides, pesticides, fungicides, and fertilisers and have resulted in drastic environmental damage in many parts of the world.

Organic food choices grown on small-scale organic farms (like us!) help ensure independent family farmers can create a livelihood. Consider it the domestic version of fair trade. It supports wildlife habitats. Even with commonly used amounts of pesticides, wildlife is being harmed by exposure to pesticides. It supports greater biodiversity. Diversity is fundamental to life on this planet. Genetically-modified and non-organic food is focused on high-yield monoculture and is destroying biodiversity.

And I imagine growing and consuming food on the island has a significant effect on your carbon footprint as well as keeping money in the local economy?

Absolutely. Growing and consuming food on-island has a hugely positive effect on our carbon footprint. There’s minimal transport impact – we collect the produce from local producers and farmers and we deliver it straight to our customers – so by buying and consuming food in this way our customers are massively reducing their own carbon footprint by not using their cars to visit perhaps many shops to get what they want, adding to the congestion of the island, as well as keeping money circulating in the local community. It really is Ibiza looking after itself and the environment as a whole.

Who is your typical customer?

There really isn’t a typical customer, we have all sorts from every walk of life. They do tend to be health conscious and environmentally conscious individuals, however. The majority are ex-pats who were customers of similar schemes in their home countries, but also we have many born & bred Ibicencos who just want great quality organic produce without the hassle of visiting all the different markets and shops across the island, especially when the roads of Ibiza become so congested in summer. We take the hassle out of that and deliver straight to your door, and as previously mentioned, greatly reducing the carbon footprint with 1 vehicle doing the work of 20 to 30. We have ever increasing demand from retreats, restaurants and villa agencies wishing to provide their own clients with our fantastic produce.

Where do you deliver to and how do people order?
We deliver throughout Ibiza, from the furthest tip of Portinax to the West End of San Antonio. It’s very simple to order, simply visit www.ibizeneco.com, make your order and we’ll do the rest. Anything that a customer cannot find on the website we do our very best to source, be it fish, chocolate or Vodka – just ask us.

Real Ibiza - June 15, 2016 0
This week we had the pleasure of catching up with Sandra Benbeniste from the Ibiza Preservation Fund. The IPF carries out some really important...