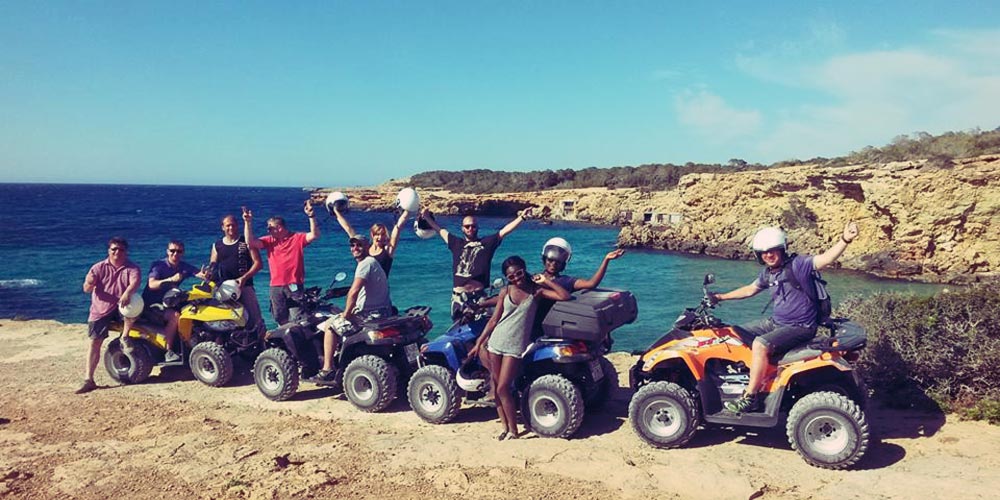 E-move is a San Antonio based enterprise that offers trips on land and sea, including two quad bike tours a day (a morning tour departing at 11am and a sunset tour departing at 17pm) which take you off the beaten track to explore some beautiful areas of Ibiza. I had heard good things not only about the itinerary of the tour itself, but also about their eco-conscious approach to the trips. To give something back to nature every time they depart on a tour, the group makes a stop to either plant a tree or water the existing ones from previous excursions. Curious, I decided to find out more and embarked on a sunset tour into the unknown.

I arrived at the E-move store, located on Avenida Dr Fleming, at quarter past five and was warmly greeted by owner Juan, before being fitted with a helmet. Although the numbers on each tour vary day by day there is a maximum capacity of 12 people per tour, with 11 of us setting out on the journey. One of our friendly tour guides gave an explanation on how the quads worked, before letting those who wanted to have a test run give it a go outside the shop before hitting the road. As I wasn’t driving today (an executive decision for the safety of everyone else on the road) I would be sitting behind one of the tour guides and was content just to watch everyone else get themselves ready. Then we were off! After a few minutes we had left the hectic frenzy of San Antonio centre behind us and were cruising down a country path on our way to the gorgeous area of Es Broll. The small winding country roads offered a scenic tour and as we got deeper into the mountains I loosened my grip on the side of the bike and started to really enjoy the sights as we sailed past. Our first stop was at the entrance to the valley of Es Broll, an area known for its ancient aqueducts that provide it with an almost jungle-like feel even in summer. We descended some old steps carved out in medieval times and reached a clearing full of small sapling trees. Our Italian-born guide Stefano explained that each tree is named by the tour that plants it, and we all gathered round to watch our very own shrub (named “Moki”) get planted and watered alongside the rest. 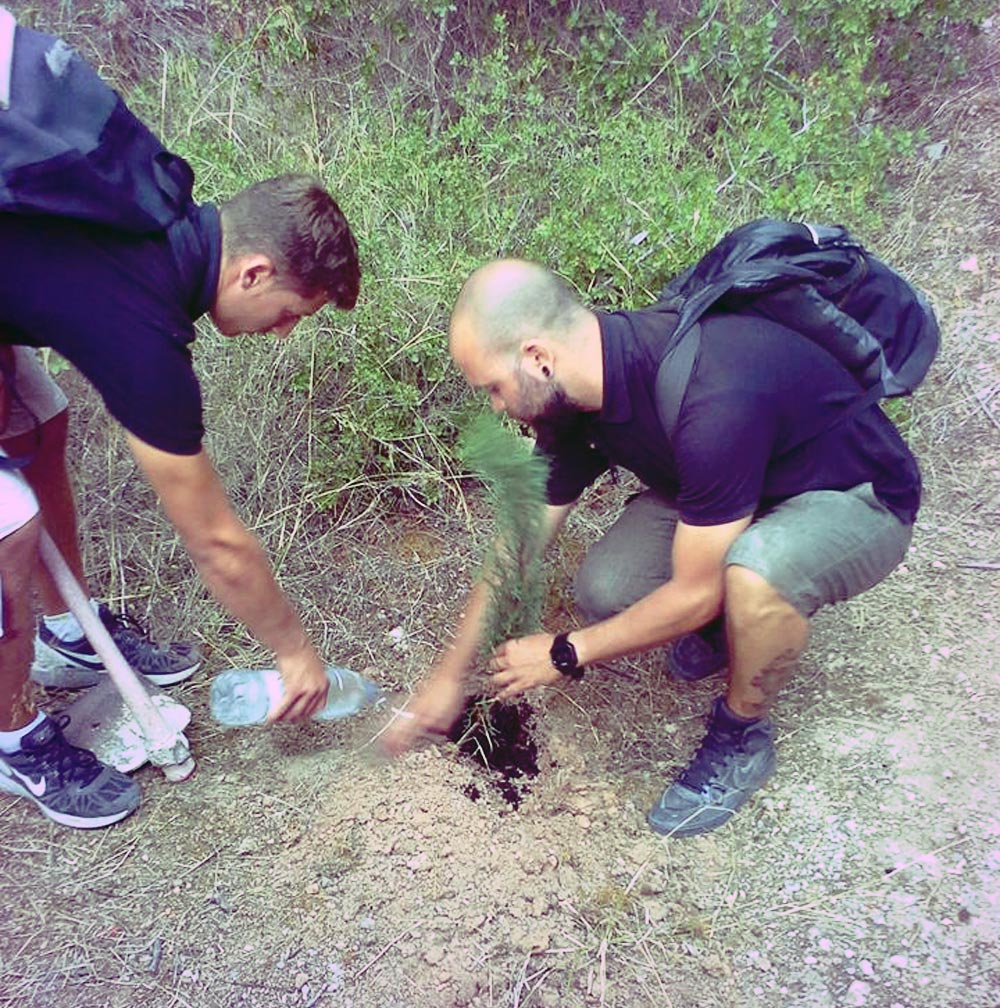 A short ride later and we reached our second stop of the day, a viewing platform aptly called “La puerta del cielo” (“The gates of heaven”), as the sheer cliff drops off so that nothing stands between you, the sea below and the sky above. There is a small restaurant here where we have a drink-break and make the most of this photo opportunity, which is especially beautiful at this time of the day when the sun is starting to set. But we have so much more to see before it does, so we set off once more towards our penultimate stop, the picturesque little beach of Cala Salada. This pebbly beach is popular amongst the locals, if a little crowded in the summer. When we arrive, however, we have the place pretty much to ourselves and settle down on a flat rock to take in the sun setting just behind the cove. It has been a fairly cloudy day today, the sun comes out for us just at this moment and makes for a gorgeous sunset. There is an opportunity to take a dip here if you want to, and our second guide Clement takes the group to a small rock where we can jump off into the water for a paddle.

Finally we make our way to the last stop at Hostal La Torre, which boasts of a picturesque restaurant terrace with fantastic views, the perfect spot to catch the last of the sunlight before it disappears. As we sip on our beers and relax before the journey back, I am already planning when I can come back to E-move for another one of their tours to see what I will discover.

Portinatx on a Budget

Winter eco-tourism with The Fenix Project

Real Ibiza - July 4, 2016 0
Foraging is a great way to make the most of the abundant and fertile flora that envelops the island, however, as with anything promoted...

Real Ibiza - July 18, 2016 0
There are plenty of ways to stay active on the island, and we have already touched upon some of the more popular water sports...