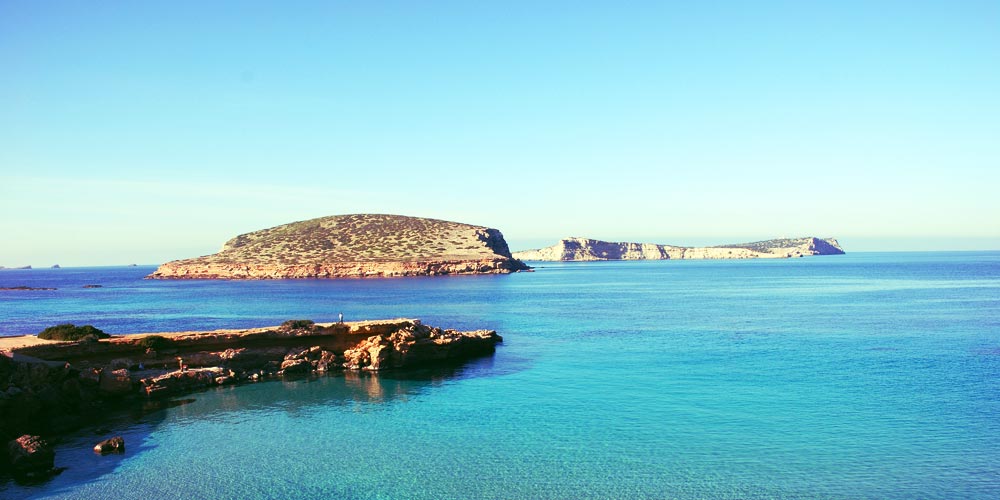 You will probably be familiar with its recognizable shape looming across the waters from Cala Conta and other adjacent harbours, but there is more to the history of the small, uninhabited island of Conejera than meets the eye. The origins of the name itself are uncertain, with some adamant that the obvious link to “conejo” or rabbit in Spanish (“conill” in Ibicenco, hence the local name of “Conillera”) whilst other believe its name is topographical and comes from the further removed  “cunicullaria” or “cavernous”. Both have a reasonable amount of weight to them as the small island was once overrun with rabbits (before they all got hunted down by hungry locals) and its sub-levels are in fact full of caverns and perforations.
Whatever the origins of its name, this island hides a history steeped in dark tales and superstition with two main stories being told of its land. The first legend has it that the infamous general Hannibal was born in one of the caves of Conejera. It is said that his father Hamilcar Barca was sailing around the coast of Ibiza with his pregnant wife when they fell victims to a terrible storm. Seeking refuge they docked into one of the islands coves where the goddesses Tanit (goddess of Ibiza) and Bes (a deity of mothers, children and childbirth) brought about the birth of the baby boy that would grow up to be a fierce and respected leader. To this day the cove in the tale is called “Casa d’Annibal” which translates as “Hannibals’ house”.

The second mystery surrounding this island is grizzlier in nature. A few years ago the skeletons of three young men were discovered and set archaeologists into a frenzy trying to unravel the origins of these bodies which appeared on a supposedly uninhabited island. They carbon dated the bones to the 16th century and found a deformity on all three sets of arms to suggest that they were seafaring men who had to hoist sails regularly. The era and nature of their professions all points towards a time when Turkish pirates roamed the seas and their cause of death certainly does not seem legitimate. All three had led musket balls impaled into their bones and two showed signs of torture. One unlucky soul even had his head removed and the skull was never found anywhere on the island. Other bones have been discovered which do not belong to these three individuals, suggesting that several struggles were fought or punishments carried out on this remote rock around that time.

Real Ibiza - August 1, 2016 0
With so many beautiful beaches in Ibiza it is hard to make a compilation of those we consider to be “the best” as they...

8 ways to improve your Ibiza Holiday