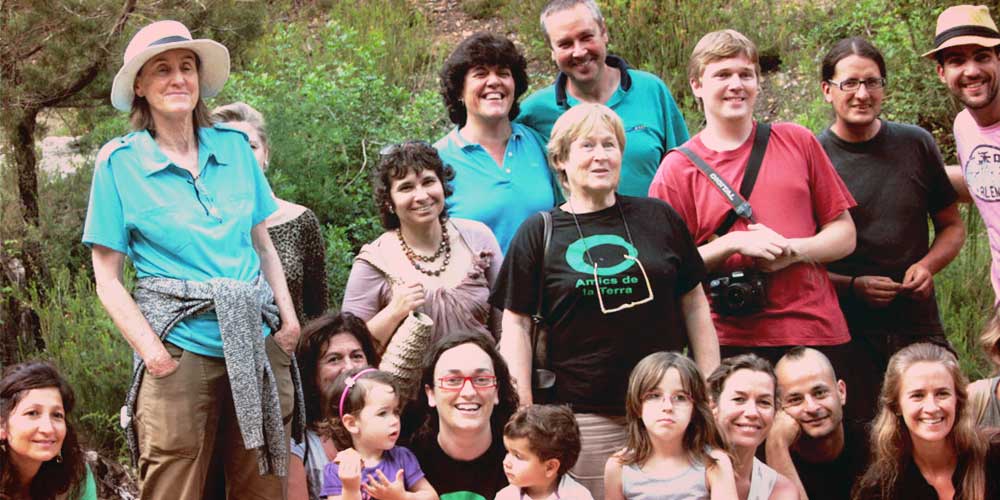 Amics de la Terra (or Friends of The Earth) is a group of environmentally conscious individuals on the island, concerned about growing environmental issues and who work to bring about change and to protect Ibiza. Together with Amics de la Terra Mallorca, this team form part of the national environmental association “Amigos de la Tierra España” (Friends of the Earth Spain), who in turn are part of Friends of the Earth International, one of the most important ecological confederations in the world.  As a very active organization that is close to our own ethos here at Save Ibiza, I was interested in hearing more about them. Here I get the chance to catch up with Amics de la Terras’ president Hazel Morgan, to find out more about the organization and what they do.

Hello Hazel, could you tell me a little bit about Amics de la Terra, how it was formed, and the role that you play?

Hello Catalina, Amics de la Terra started in 1989, so it’s been going for 26 years, by a group of mostly foreigners living in San Antonio.  We became part of Friends of the Earth Spain and although we are largely independent financially, we share the same objectives and philosophy. The phrase “Think Globally, Act Locally” is one that we coined by Friends of the Earth International and we apply this to what we do. The group started out by simply protesting and demonstrating against what was wrong, but we have evolved over the last 10 years to become more professional, learning about laws and regulations in order to give focus on what we can achieve.

My role is that of president, although I am a volunteer as are all the members of the board. We have 2 paid workers, both dedicated and experienced, which is a luxury! The team can usually be found in our office, where most of our planning takes place in Ibiza town. I am a coordinator, project-designer, ideas-builder and I also network with other groups as well as Friends of the Earth Spain. At the moment our group has 200 members and around 2000 “supporters” who get involved and support us in our events.

What are the most important projects going on at the moment?

We are involved in many areas including food and farming, energy and climate, waste and natural resources and protected natural heritage sites. We always try to include public participation of some sort as this integrates what we do into peoples’ lives and gives them the tools to live more sustainably. For example, we promote local farmers through visits to the land to learn how to cultivate the orchards, make compost, and so on. It is our belief that a society can only change if more people are aware of the problems and are given the tools to act, not just by political work and sitting in your office.

Due to a change in funding possibilities this year we haven’t had the opportunity to work on the important project of organizing visits from schoolchildren to farms to see how their food is produced. We want to teach kids that what they eat doesn’t just come from the supermarkets. Although we haven’t had a chance to continue these visits this year we are hoping to continue with the project next year.

Another important project involves visits to where waste is treated, to see the process it goes through. People still believe it all goes to the land fill site, which isn’t true, and we want people to see with their own eyes so that they recycle their waste correctly. We encourage recycling, but recycling should be the last option, first people need to buy and consume in a different way so that waste doesn’t even enter their house in the first place. We also make visits and clean up on beaches so people can  collect information on the type of waste that washes up on the shores of our coast.

Many of these activities show the need for a change in the system of waste collection. We defend the implementation of the “Deposit/Return” system in Spain. This is applied in many countries and works so that when you buy things like drinks made out of metal or aluminium you pay a deposit, which you get back when you give the empty containers back through automated machines. This is the best way to reduce waste as when things have a value people generally don’t throw them away. This system hasn’t been facilitated by Spanish law as certain companies profit from the present system, but we are trying to educate people and raise awareness of how this system will help us.

How do you think tourism has impacted the island?

The construction industry has become overinflated and apparently unstoppable. People need to stop building. There are just too many people on the island and all of this needs to slow down. Our infrastructures, like sewage plants and roads or social services like the courts or the hospital, aren’t equipped to handle such a high population. Tourism has also had a great social impact, with some getting very rich very quickly, with all the problems that can then ensue…

How can we change this?

The world economic system is so negative and causes many of the main problems in the world: inequality, violence, socioeconomic divides…it all has a lot to do with the economy. Change will only really happen once people start to realise that all these issues apply to them too. They need to be educated, feel integrated and change their way of looking at things. In other words, realize that they are part of the problem but also the solution, which is also part of our work.  On a local level, it will only really change when the town halls get money from another source that doesn’t involve building and construction licences.

Have you seen any lasting changes since you started the association?

I can give you a few examples: Ten years ago we started a project called “The Bet”. This idea originally came from Germany as a way to get the problem of climate change into the press. Schoolchildren decided that the authorities were not doing enough about climate change and so placed a bet with the politicians, declaring that they could do it better in their school. The rules were “if we win then you have to treat us to a big party, and if we lose then we have to buy you a sandwich”.  Schoolchildren from local schools took part and calculated everything they did in terms of CO2 reduction, from recycling to insulating, to water waste…everything had a value. This began with an energy AUDIT of the school, followed by an action plan which generated ideas such as unscrewing one in every three light bulbs as they didn’t need to use them all and a game to prevent kids bringing their sandwiches to school wrapped in aluminium. The game involved every classroom having a ball of aluminium and every time someone brought a sandwich in wrapped in aluminium it was added to the ball. The class with the biggest ball lost, so everyone wanted to be extra good and have the smallest ball of aluminium. Many of these habits have lasted in the school long after the project ended. Although the bet was never officially signed in Ibiza the kids still won and had their party, and the Balearic Government now uses many of the activities, copied from this project in different schools around the islands.

What can those who want to help do to get involved?

You can support us by becoming a member. It isn’t very much, just 45€ a year and you are given all the information about what we are doing and a chance to learn more and participate in our activities. We do want volunteers but it’s hard because usually volunteers need training and often people stay for a bit and then move on, meaning we need to start training again, so really we need something more long-term. We do like to mix with the public and always have stands at events like Earth Day and Environment Day where we offer activities and information, and we often need volunteers to help man those stalls. I guess the best way to get involved is to become a member, join our activities, get to know us and what we are about and then see how you can help after that.

The San Jordi Market In Pictures

Real Ibiza - October 1, 2017 0
Held in the beautiful gardens of Atzaró the Ibiza Spirit is an all day festival "Celebrating the Spirit of Ibiza in Dance, Consciousness & Love...

Real Ibiza - May 6, 2021 0
Mark Broadbent (former promoter of We Love and current promoter of Pikes On Sundays) interviews some of his good friends and long time Ibiza...